Dinosaurs have put this Alberta town on the world map. Now Drumheller has even more to offer with a powerful, next-generation network connection that gives it the technological and economic upper hand when it comes to taking full advantage of the impending global 5G revolution.

There is no better place to take in the wild, sweeping landscape of the Alberta badlands than from the jaws of a replica Tyrannosaurus Rex, 80 feet above the town of Drumheller, a little over an hour’s drive east of Calgary.

This is the Dinosaur Capital of the World, after all. The silt, stone and soil in this region are home to one of the planet’s richest collections of bones and fossils that date life on earth back 70 million years, and draw nearly half a million tourists to the region every summer. 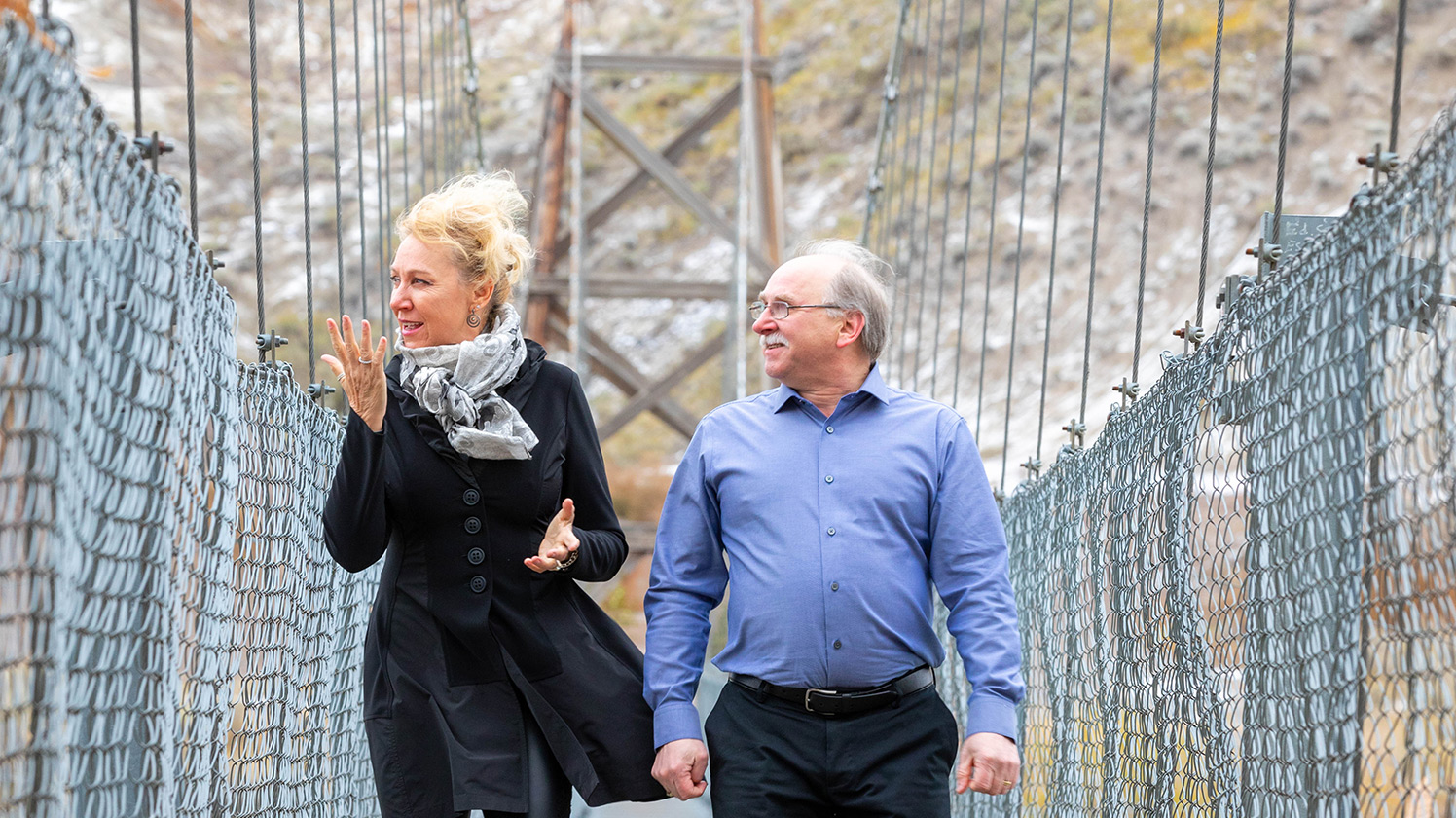 Drumheller Mayor Heather Colberg and local entrepreneur Brian Yanish say their town, known as the Dinosaur Capital of the World, is open for new business. Powered by the TELUS PureFibre network, residents and business owners now enjoy the same connection advantages of a major urban centre.

But dinosaurs aren’t the only buried treasure fueling Drumheller’s economy.

A next-generation fibre-optic network can also be found here. And with it comes the power to transform this small town into a futuristic hub bursting with opportunities for entrepreneurs and innovators. Each hair-thin fibre-optic strand vastly boosts internet speeds to homes, businesses, hospitals, universities and high schools, and offers virtually unlimited capacity to meet the data demands of an increasingly connected world.

Critically, fibre also makes it possible for people to live and work where they want, while enjoying the same connectivity benefits of a much larger city. That’s a vital ingredient for Drumheller, which is actively seeking to attract newcomers to the region with the very fastest network connectivity, coupled with affordable housing, a young population and a more leisurely pace of life compared to urban centres. 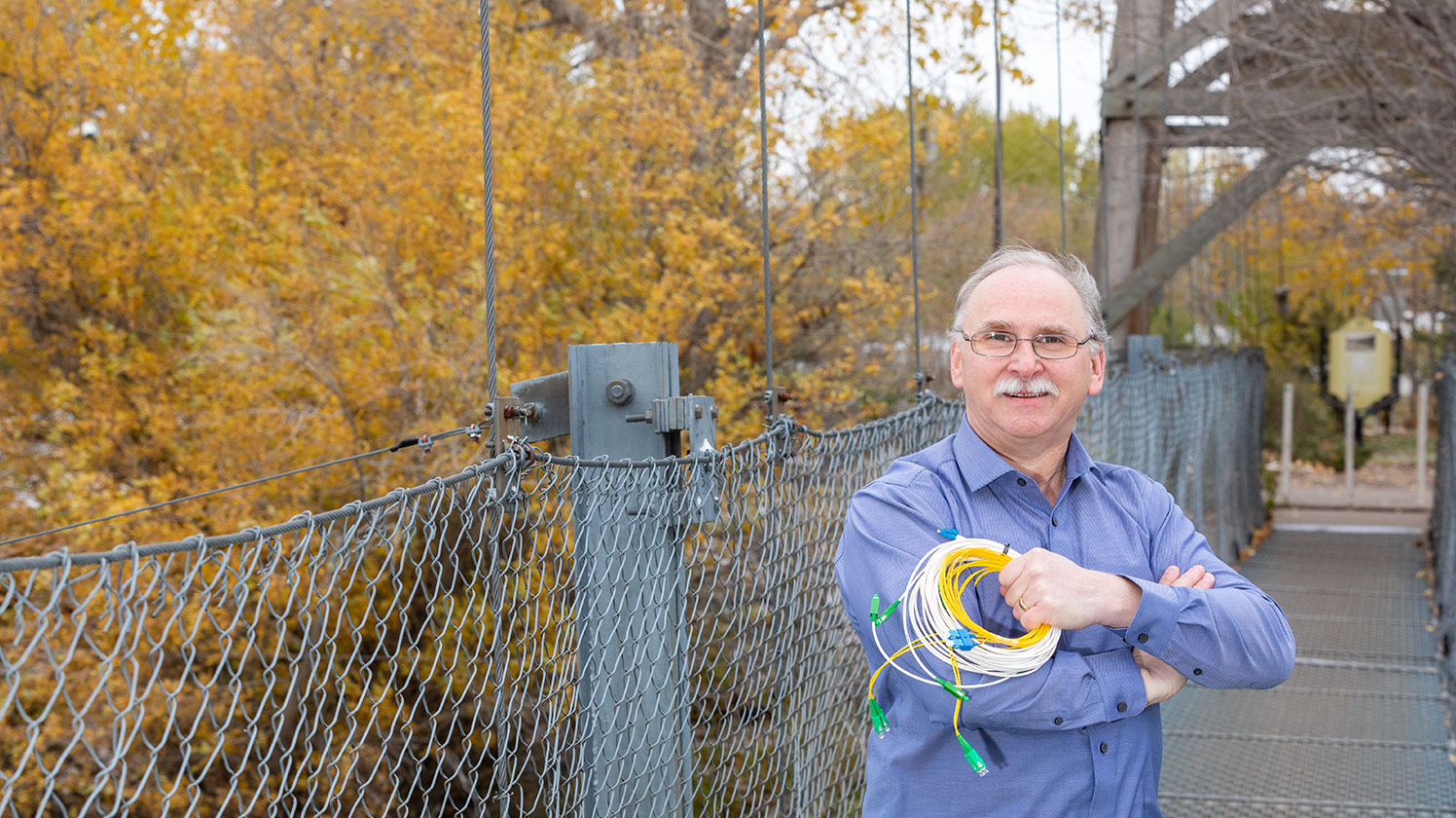 “We, as a community, have always had so much to offer. There is also so much breathtaking beauty to take in -- biking and hiking trails, an incredible river that flows right through town,” says Heather Colberg, Drumheller mayor and a life-long resident.

“With fibre, people can have all that at their fingertips, without having to fight the grind of the rat race in the 8-to-5 urban world.”

Competing on the global stage

Helping Drumheller achieve its vision is TELUS. Since 2015, the company has invested millions to connect the town to its PureFibre network, giving it the technological and economic upper hand when it comes to taking full advantage of the impending global 5G revolution. Over the next five years, TELUS will invest another $16 billion in Alberta to connect more homes and businesses to PureFibre, enabling improved access to healthcare and agricultural technology and Internet of Things capabilities, as well as preparing the province for 5G, including automated vehicles and smart cities.

It’s exciting news for Brian Yanish. The Drumheller-based entrepreneur was among the first to sign up for fibre, and has watched his home-based business boom.

Yanish first moved to Drumheller in the 1990s. It was intended to be just one stop of many in a career that saw him move 10 times in as many years. But there was something about this town the family immediately connected -- scenery like something straight out of a John Wayne movie and a welcoming community filled with friendly people.

“We decided right away that this was a great place to raise our kids,” he says.

Twenty-five years later, that feeling has only deepened as Yanish and his family have built strong friendships, along with a successful home-based marketing and website development business, MarketingHits.

More recently, Yanish has added national and international conference management to his list of professional offerings -- everything from overseeing the digital registration of 10,000 delegates at a conference in Calgary to launching an interactive gaming app he helped to develop at conferences in Bahrain and Dubai.

In each case, he relies on fibre to keep him seamlessly connected with clients wherever they are in the world via video-conferencing, and provide real-time support to tech teams on site.

That he can do all this from his home in Drumheller is “pretty satisfying,” says Yanish, adding he has been able to take on even more clients by eliminating the need to travel to events in person.

Business is so good, in fact, Yanish recently hired two of his daughters to work with him full-time, while his youngest daughter works part-time. He expects to expand the company even further over the next year as he builds on what he can offer clients through new partnerships with creative collaborators and tech innovators across the country.

“Small communities with fibre have so much opportunity, attracting many more tech companies and businesses to town. I’m really blown away by the potential,” he says.

The success enjoyed by Yanish and his family is one Drumheller politicians and staff are hoping to duplicate. Or, more to the point, inspire others to give it a try.

In a move led by council, the town has hired an economic manager, as recommended by the economic task force made up of 45 people from the community, in a deliberate bid to diversify the local economy.

Fibre is one more tool -- albeit an important one -- for the town to tap into the strength of Canada’s small businesses, which are the backbone of the Canadian economy and employ more than eight million people, or 70 percent of the total private labour force.

“We know the millennial workforce is all about technology. We’d like them to think of us when they are looking for a quiet, friendly and more affordable place to live,” says Colberg.

There’s also all that stunning natural beauty to be found in the valleys and hills once ruled by the dinosaurs. To Colberg and 8,000 others who already call Drumheller home, it’s unlike anywhere else on earth.

“We see endless opportunity,” she says of the town’s future. “We are this diamond in the rough that is now starting to shine.”