When everyone’s isolating, Nathan Doris is there to keep us connected

Above: Nathan Doris takes his job as a wireless network technician for TELUS seriously, ensuring customers are never without a signal.

The forestry road deep in the woods of northeastern Alberta had dwindled to little more than an animal track and his truck was now covered in thick mud splashed up from the sleet-covered ground.

He feared he was lost and Google Maps, its loading symbol spinning endlessly, was no help.

But Doris, a wireless network technician for TELUS, was propelled down the narrowing road with a single thought: with cell service down, workers in the remote Hamburg oil patch had no way to contact the outside world.

It was something Doris couldn’t stomach.

“The people in Hamburg are completely isolated,” he says. “What if it was my family member out there and there was an accident and they can’t dial out for help because of something that I can fix?”

Today, as a wireless network technician based out of Grande Prairie, Doris ensures cell sites are working properly. It’s a job he’s proud of, taking seriously the responsibility of ensuring users are never without a signal.

There’s a lot on the line: Canadians already enjoy the most advanced, accessible, and envied wireless networks in the world -- networks that consistently rank among the fastest on the planet. From small towns to downtown urban centres, more than 99 per cent of Canadians can tap world-leading speed, coverage and quality from TELUS’ 4G LTE wireless network. In fact, a recent independent report from Opensignal found Canadians living in rural communities experience download speeds that outpace five of the seven G7 peer countries. This is all the more impressive when considering our country’s vast and challenging landscape.

And that connection is only growing. TELUS continues to invest significantly to increase both wireline and wireless Internet capacity in even our smallest communities, from coast to coast to coast.

For those working in Alberta’s oil patch, commitment to rural connectivity is particularly meaningful. Reliable coverage is a lifeline for those living and working in remote areas — not just for emergencies but also as the sole connection to loved ones. Cell towers bridge outlying camps to communities across the province.

When electrical outages occur, TELUS towers have battery backup that can continue to power sites for up to 12 hours — time enough to allow for necessary repairs to the infrastructure.

But, when the power went out in mid-April around the Hamburg oil patch — a remote area several hours northwest of Grande Prairie, nearly brushing up against the B.C. border — repair work proved complicated. Doris stepped up to do his part to ensure workers at the sites stayed connected. 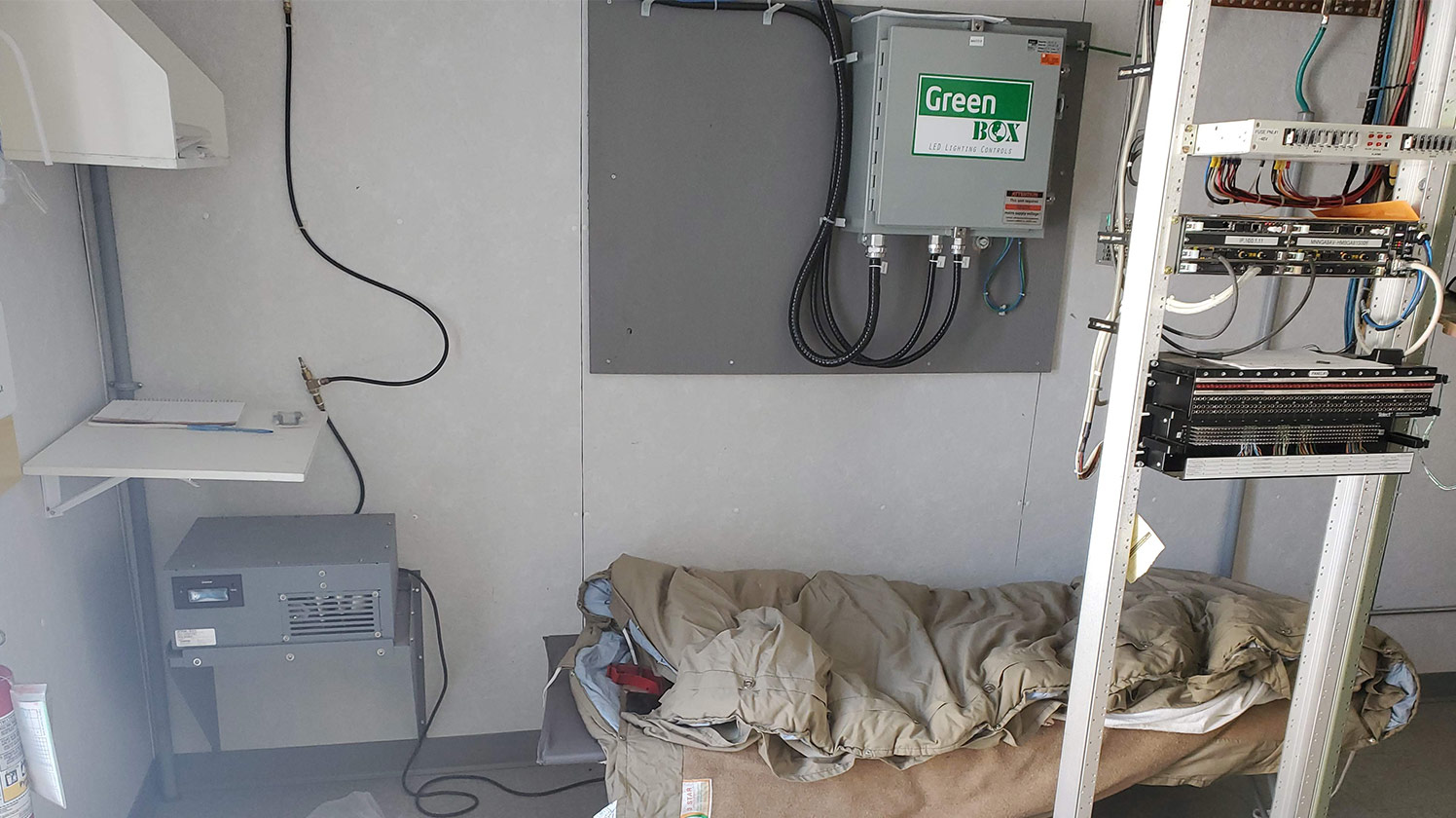 A remote wireless site in Hamburg, Alberta served as home for a night for Doris, who drove nearly 24 hours -- there and back -- to ensure oil patch workers stayed connected with loved ones back home.

There was no debate. Even his pregnant wife, a teacher currently working from home because of the COVID-19 pandemic while looking after their two-year-old, told him to go.

“If I know a cell site is down, if there’s going to be an extended outage, I will drive out there, no question,” he says. “I feel responsible because I have the ability to fix those things.”

If Doris ever needed a reminder of why his job matters, he got it during a 2019 trip to High Level, as the community battled wildfire.

For 20 hours a day, he and other TELUS technicians worked to keep communications open for people spread out across rural areas, ensuring they could contact loved ones and had a way to reach out in case of an emergency.

At the time, he was stopped by a woman living near the small community of Meander. She thanked him for caring so much.

That small moment has fueled Doris, driving him to react to each outage like it’s the most important job in the world.

“Every time there is a power outage, I get that same rush of emotion I had when I spoke to that woman: I need to go,” he says.

Knowing he wouldn’t be at the Hamburg site until late at night, and understanding food and board along the road would be hard to come by in light of the pandemic, Doris packed accordingly: generators to power the tower, tent, stove, water, oranges, some leftover homemade elk stew and a smokie sausage.

The nearly 16-hour drive was tough; more so as the weather turned from rain to sleet and pavement bled into rough gravel. He pushed further west on a seemingly unending, narrowing road as the sun disappeared into the horizon. Headlights pierced the dark as he continued, no longer confident he was going the right way, if he’d gone too far, if he should have turned down any of the innumerable side roads. 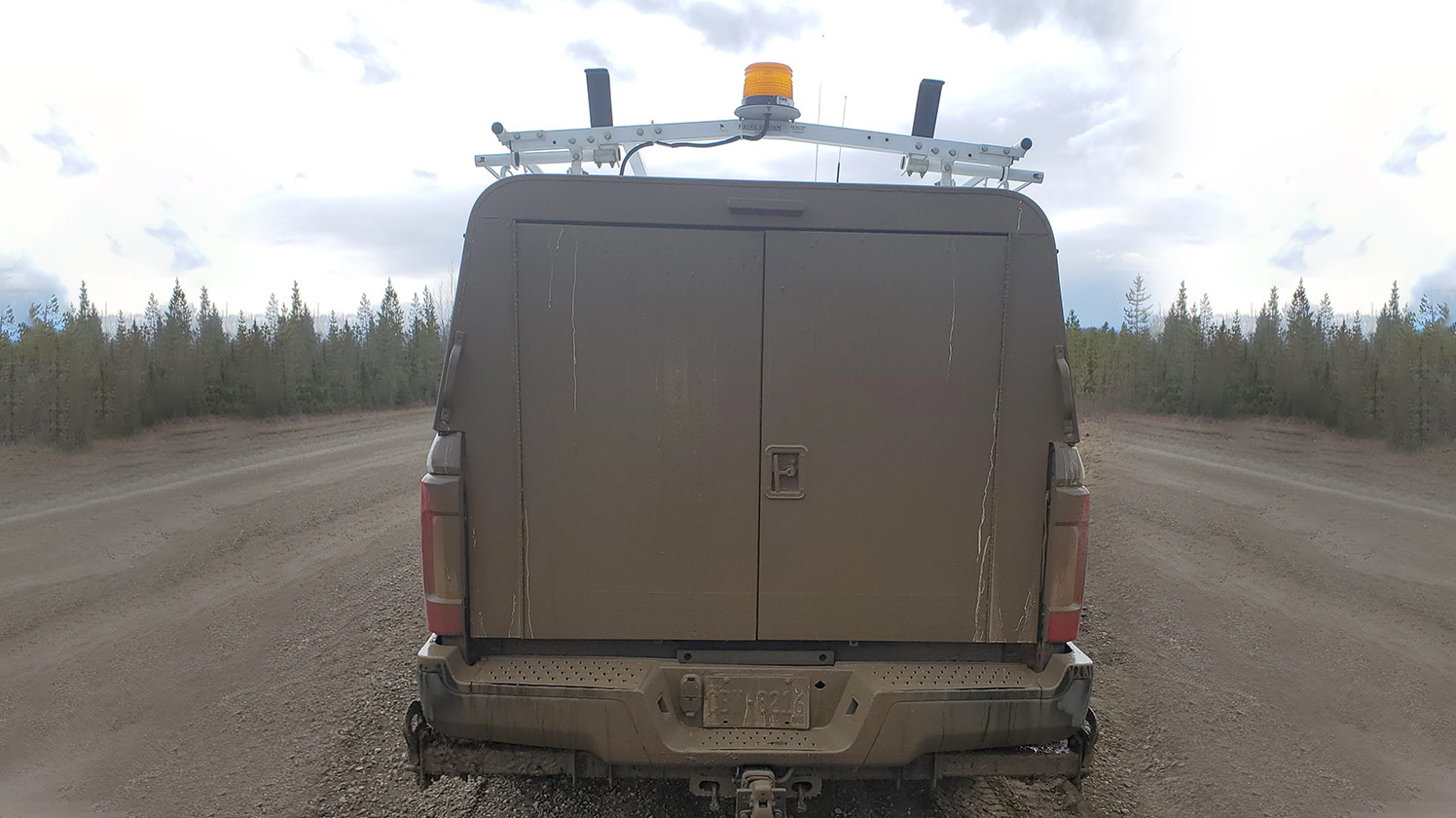 Doris’ service truck covered in thick mud: a symbol of the lengths he’ll go to do his job.

With no cell service, GPS was no help.

Rolling up to a gas plant, Doris spotted headlights and pulled over with a feeling of relief.

“The first thing the man said is, ‘Are you lost?’”

When Doris explained he was with TELUS and was looking for the cell tower so he could get it back up and running, the man couldn’t hide his surprise.

“He was astonished that I drove out there in the middle of the night to get them cell service,” says Doris.

“I just told him that this was important.”

At the site, Doris set up the generators and restored power to the tower. Within minutes he had a text from the man he’d met earlier, thanking him for making it possible to communicate again, especially with his family — particularly important during the isolation and anxiety brought on by the coronavirus pandemic.

With the generators humming, Doris got himself ready for bed, falling asleep to the drone of the machinery keeping lines of communication open. And, fuelled by a breakfast of stew and smokie, he pointed his truck east for another epic drive home.

“That’s what makes it for me. You don’t realize it in your job, day to day, but you have a direct impact on people,” he says. “I get such satisfaction being able to connect people back together.”